On October 4, 2018, the Bureau of Economic Analysis (BEA) released current-dollar statistics on personal consumption expenditures (PCE) by state for 2017. PCE increased in all states and the District of Columbia. PCE grew 4.3 percent nationwide in 2017, ranging from a low of 2.0 percent in North Dakota to a high of 6.9 percent in Idaho (chart 1).

Additional highlights include the following:

PCE by state is a household consumption measure that reflects the value of the goods and services purchased by, or on behalf of, households by state of residence. These statistics on households provide an indication of economic well-being as well as information on consumption patterns across states and over time. For example, the statistics show how households allocate their spending between goods and services, or between necessities and discretionary items, or how consumers adjust their spending to changes in the economy.

PCE by state statistics complement BEA’s other regional statistics, including personal income and gross domestic product (GDP), to provide a greater understanding of past and current regional economic conditions. 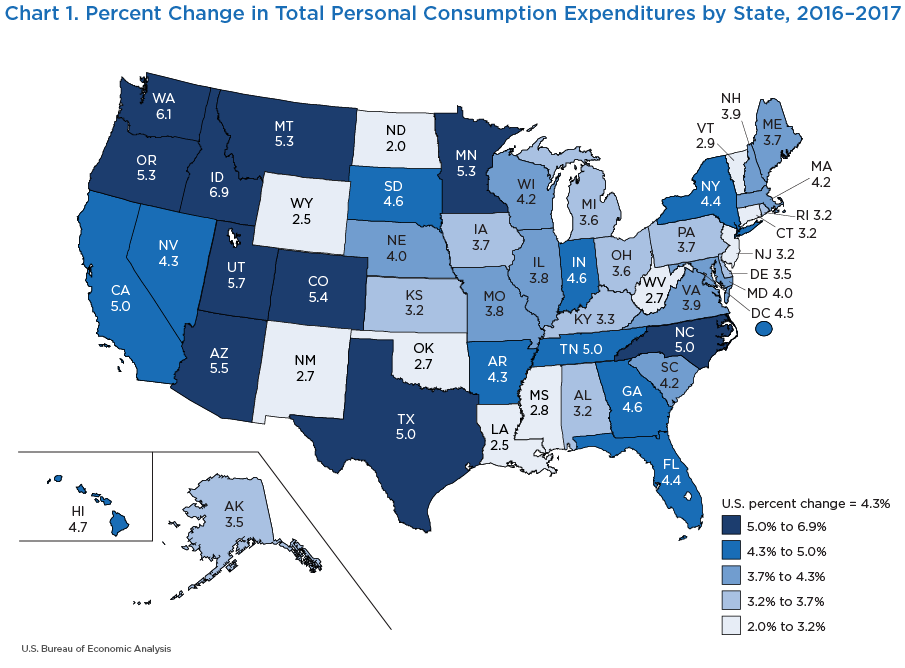 Note. Percent change from preceding period was calculated from unrounded data. Expenditures may not sum to higher level aggregates because of rounding.

Health care services include spending on physician and dental services as well as hospitals and nursing homes, but the category does not include expenditures on pharmaceuticals (prescription drugs) and therapeutic appliances (such as eyeglasses and contact lenses). Expenditures on pharmaceuticals and therapeutic appliances are captured in the other nondurable goods category and the other durable goods category, respectively. Housing and utilities services include spending on rents for tenant-occupied housing, imputed rents for owner-occupied housing, and utilities, like water supply, trash collection, natural gas, and electricity. The health care and housing and utilities categories accounted for about 35 percent of the total expenditures on PCE at the national level (table 3). The health care category was the largest share of expenditures in 27 states, and the housing and utilities category was the largest share in 23 states.

Utah’s economic growth has primarily been driven by growth in professional, scientific, and technical services. In current dollars, professional, scientific, and technical services GDP for Utah grew 8.1 percent to $11.1 billion dollars in 2017. Utah is seeing a flock of small Silicon Valley financial technology (FinTech) companies migrating to the state. Simultaneously, larger traditional financial service firms that have historically existed in Utah have also been taking advantage of the favorable business environment by expanding their scale and operations within the state. The increase of scale and operation from the larger financial service firms and the attraction of FinTech companies have contributed to Utah’s above-average population growth rate. Wages and salaries for professional, scientific, and technical services in Utah experienced an increase of 9.3 percent to $6.9 billion dollars, while employment grew 3.5 percent to a total increase of 147,000 jobs in 2017. Utah’s increasing population, paired with the state’s favorable business conditions, have made PCE growth in Utah the third fastest in the nation.

Gasoline and Other Energy Goods, 2017 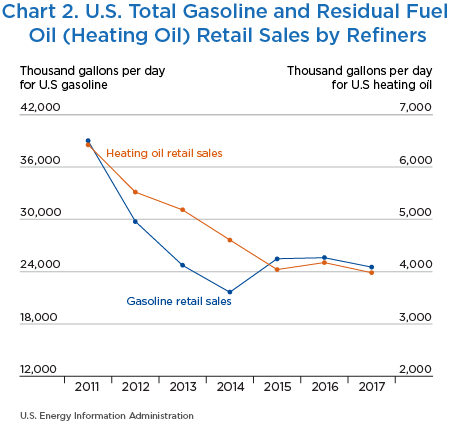 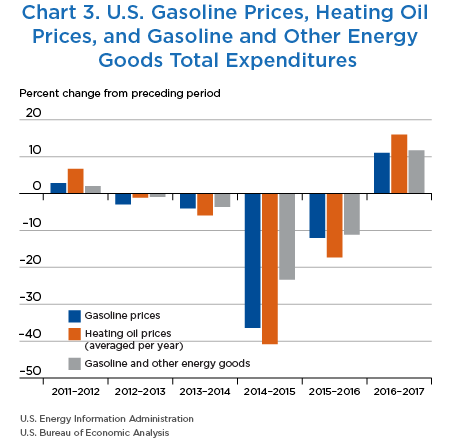 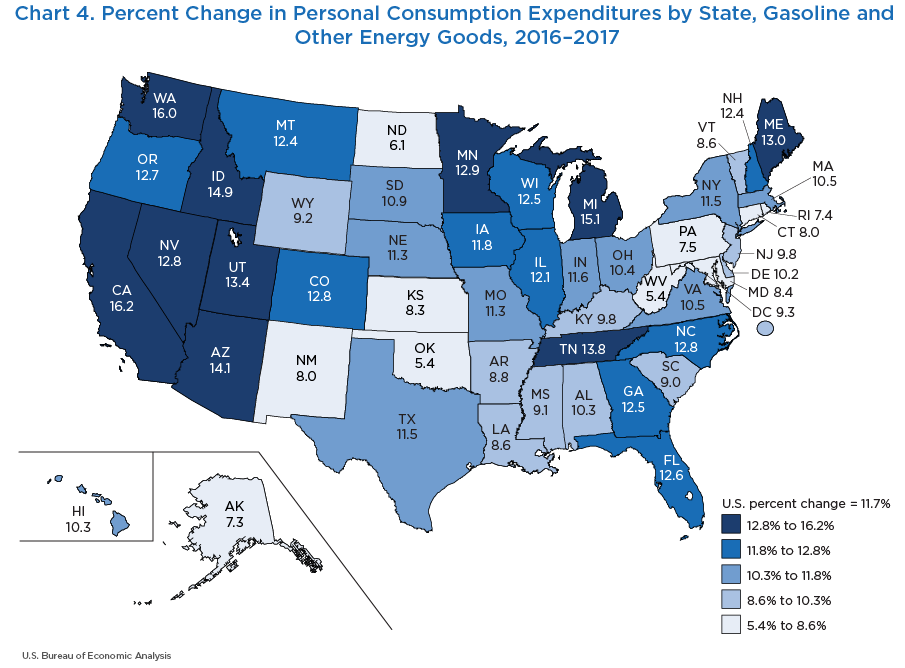 Comprehensive Update of PCE by State

The October release of PCE by state included updated statistics for 1997–2016. The updated statistics incorporated the results of the 2018 comprehensive update of the National Income and Product Accounts (NIPAs) and newly available and revised regional source data. Source data that were either revised or newly released include revised data from the Bureau of Labor Statistics Quarterly Census of Employment and Wages for 2001–2016, new 2016 data from the Census Bureau American Community Survey, and revised 1997–2014 data from the U.S. Centers for Medicaid and Medicare Services (CMS) (table 5).

In addition to the new and revised source data, the comprehensive update of PCE by state reflected methodological changes for the housing and utilities category and for the financial services and insurance category.1 The methodological modification to the housing and utilities category removed the effect of utility payments included in the source data for contract rents. The improved methodology for the financial services and insurance category introduced new source data from the Federal Deposit Insurance Corporation (FDIC) and the National Association of Insurance Commissioners (NAIC) as well as from other sources. As a proportion of total PCE, these categories comprised approximately 26 percent of PCE nationwide.

Note. Percent revision from preceding period was calculated from unrounded data. Expenditures may not sum to higher level aggregates because of rounding.

Three primary methods are used to create the initial detailed PCE by state estimates: receipts and expenditures, price times quantity, and other methods. The method used depends on the data that are available for each spending category.

The receipts and expenditures method uses receipts from the Economic Census to create estimates for almost all categories of goods and many categories of services. The receipts are adjusted using class-of-customer data by state and other data sources to remove nonhousehold purchases.

For several categories, which include housing and utilities, higher education, and foreign travel by U.S. residents, price and quantity data are used to create the estimates.

For the remaining PCE categories, various source data and methods are used to produce the statistics. Financial services and insurance is the largest of the remaining categories, and it uses source data from the FDIC, the National Credit Union Administration, Statistics of Income from the Internal Revenue Service, and the NAIC.3

The final step in the PCE by state process adjusts the statistics for residency. The statistics based on the Economic Census data need to be adjusted to reflect spending by place of residence because the Census data are collected based on point of sale. Travel, tourism, and differences in sales taxes in neighboring states are examples of why consumers make purchases outside of their home state. For instance, many New York City residents often defer gasoline purchases to coincide with trips to New Jersey because New Jersey has considerably lower taxes on gasoline.

The residency adjustments are based on comparisons of the estimates with independent data sources related to state-level household spending. These sources include state population, state disposable personal income, and consumer expenditure survey-based data from the Bureau of Labor Statistics.4 Residency adjustments are made with category-specific, state-level ratios of survey-based household expenditures to the expenditures derived from the Economic Census receipts.

The estimated expenditures are adjusted when nonresident spending is present. Residency adjustments are applied mainly to travel-related and tourism-related categories and states. Examples of these are transportation services, recreation services, and tourist destination states, such as Hawaii, Nevada, Florida, New York, and the District of Columbia.

The financial services imputation approximates the value of financial services that households receive either without payment or for a small fee, which does not reflect the full value of the service. Examples of these services include no-additional-fee checking accounts, record keeping, and safekeeping of deposits.

For regional income statistics, a resident is considered a participant in a regional economy regardless of national allegiance or duration of residence. Regional income statistics exclude the income earned by U.S. residents living abroad but include the income earned by foreign nationals working in the United States. PCE by state also excludes net expenditures of U.S. residents abroad. However, PCE by state includes the travel expenditures abroad by U.S. residents.