In April 2019, the Bureau of Economic Analysis (BEA) released updated measures of the digital economy’s contributions to the overall U.S. economy. The measures include estimates of digital economy gross output, value added, employment, and compensation for the period from 1997 to 2017. The new estimates rely on the same methodology for measuring the digital economy as those used for the initial estimates BEA published in March 2018. The April 2019 update incorporated underlying data revised during the 2018 comprehensive update of the Industry Economic Accounts and expanded the time series.

The updated estimates show the digital economy accounted for 6.9 percent ($1,351.3 billion) of current-dollar gross domestic product (GDP) in 2017, up from 5.9 percent in 1997. Digital economy real value added grew at an average annual rate of 9.9 percent per year from 1998 to 2017, compared to 2.3 percent growth in the overall economy.

BEA prepared these statistics within the supply‐use framework, following methodology used in the production of BEA satellite accounts, including those on travel and tourism, arts and cultural production, and outdoor recreation.1

Using this definition and the existing detailed data from the supply‐use tables (SUTs), BEA identified goods and services for inclusion in the digital economy estimates. BEA classifies data in the SUTs using a framework that includes about 5,000 categories of goods and services based on the North American Industrial Classification System (NAICS).

The SUTs are an integral and essential element of the U.S. economic accounts. First, they are the building blocks for other economic accounts. Prominent among these are BEA’s National Income and Product Accounts (NIPAs), which feature the estimates of expenditure-based GDP. Second, the SUTs show how industries interact; specifically, they show how industries provide input to, and use output from, each other to produce GDP. They are a complete, balanced set of economic statistics, and they present a full accounting of industry and final-use transactions.

The core of the SUTs consists of two basic national-accounting tables—a “supply“ table and a “use“ table. The supply table shows the commodities that are available for domestic consumption. The use table shows the inputs to industry production (intermediate inputs) and the commodities that final users consume. The use table is the most frequently requested table because of its applications to the estimates of GDP.

BEA uses NAICS to classify industries. The United States, Canada, and Mexico jointly developed this classification system with the aim of improving the comparability of their economic statistics. NAICS classifies industries based on their production processes. The NAICS codes comprise six digits, which reading from left to right, indicate the general sector down to a detailed industry.

BEA prepares benchmark SUTs roughly every 5 years based on the highest quality source data, notably the U.S. Census Bureau Economic Census. Largely because of their rich source data, the benchmark SUTs are the most important statistical source of information for comprehensive updates of the NIPAs and are widely used by other statistical agencies. BEA released the most recent benchmark SUTs in 2018. These accounts cover 2012 and use the 2012 NAICS for classification.

These estimates serve as the base for future estimates that will also include partially digital goods and services. Including the latter requires additional data and research to split out the portion of the commodity value that is in scope for the digital economy. The last section of this research notes some of the efforts related to measuring partially digital goods and services.

Digital‐enabling infrastructure is comprised of the basic physical materials and organizational arrangements that support the existence and use of computer networks and the digital economy. Table A describes the sub-components included in digital-enabling infrastructure and indicates BEA’s coverage of the sub-component in the current digital economy estimates.

For both structures and internet of things (IoT) infrastructure, BEA does not currently have data available to separate digital economy activity from all other activity. The case of IoT infrastructure presents additional challenges. For example, the connectivity of an internet‐enabled refrigerator may allow the owner to track and purchase food items when they are running low or record usage of the appliance. However, the primary function of the refrigerator is to keep food cold, output which BEA would not classify as being part of the digital economy.

BEA uses the term “e‐commerce” to broadly describe all purchases and sales of goods and services that occur over computer networks. E‐commerce reflects the nature of a transaction for goods or services. BEA considers e‐commerce to include digitally ordered, digitally delivered, or platform‐enabled transactions.

E‐commerce output is generally measured as the wholesale or retail trade margin on “digitally ordered” goods and services sold over the internet or through some other electronic market. The margin is equal to total revenue earned from online sales less the producer cost of the goods and services. BEA included in the estimates the margin activity of electronic market establishments and some nonmargin activity as described in table B. For peer-to-peer (P2P) e-commerce, BEA captures the associated transactions, but is currently researching data and methodology to split out the value of this output in scope for the digital economy.

Increasingly, consumers forgo the physical purchase or rental of products like books, newspapers, music, and videos, opting instead to access these products online in a digital format. BEA defines digital media as the content that people create, access, store, or view on digital devices. 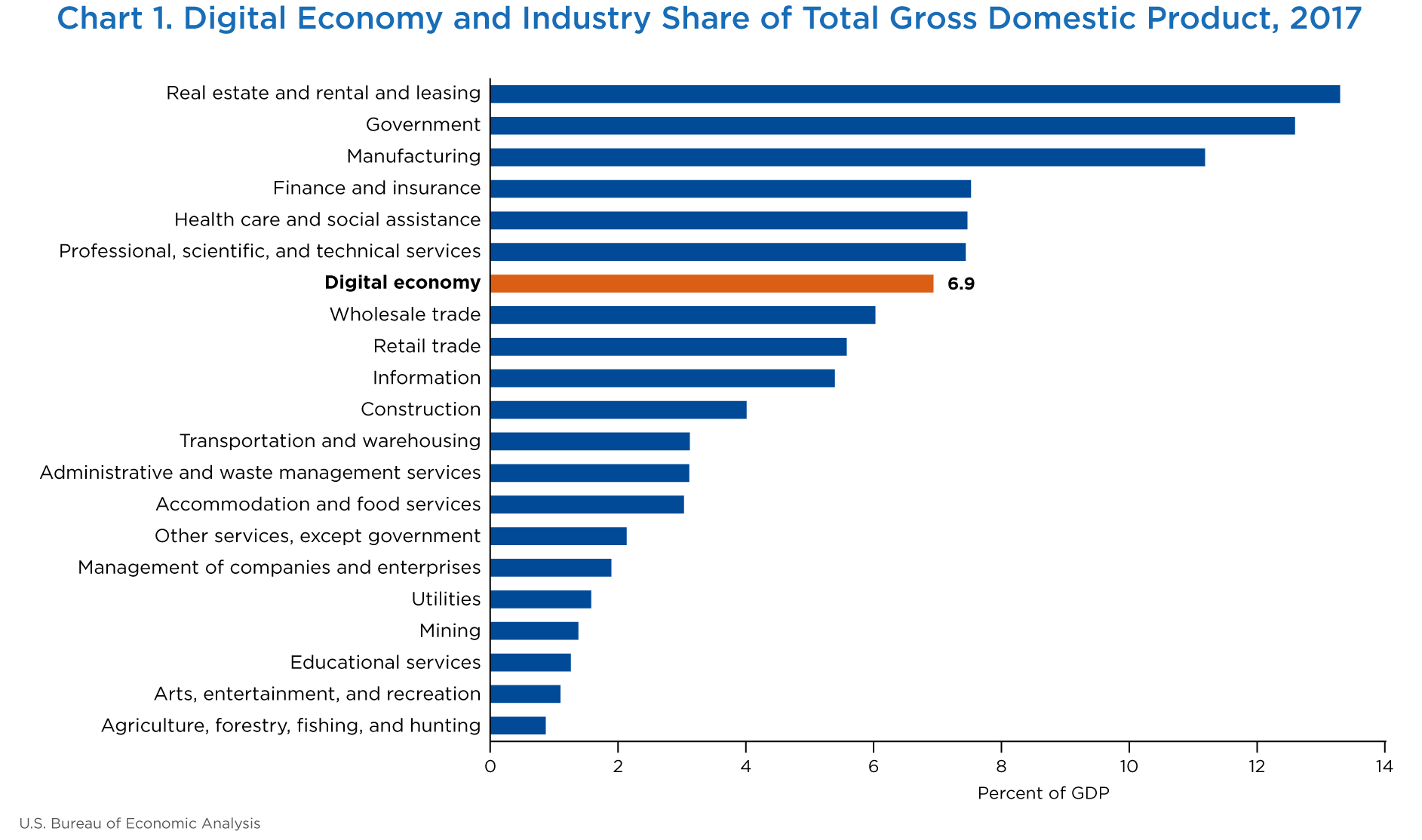 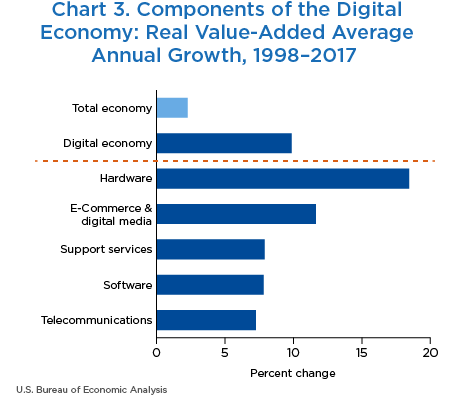 In current dollars, digital economy value added decreased in 2001; this was the only year in the series in which year-over-year, current-dollar growth was negative. From 1998 to 2001, digital economy prices rapidly decreased. The value-added price index fell by 7.3 percent from 2000 to 2001, with the index for hardware falling by 33.9 percent as the quality of computer hardware increased rapidly. 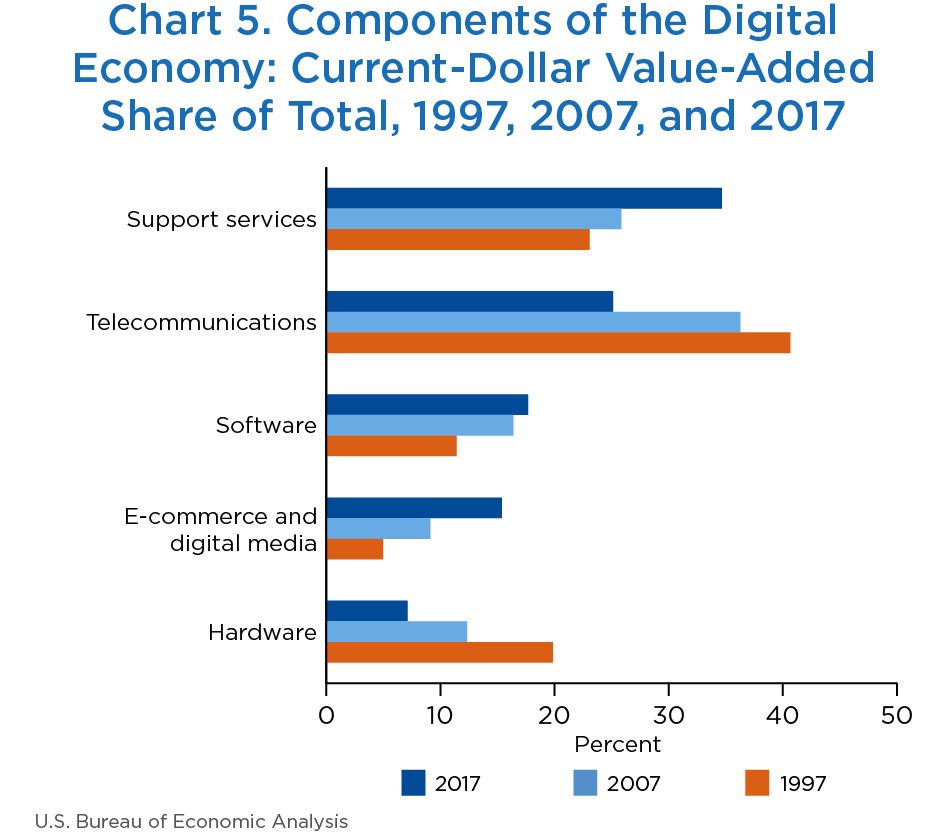 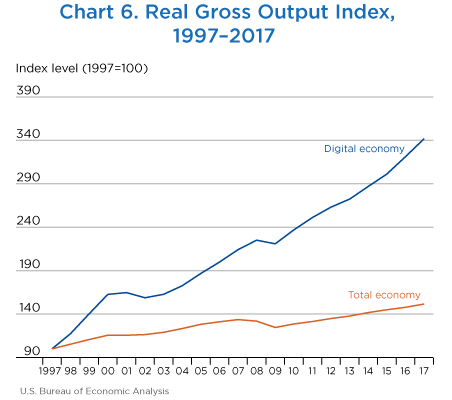 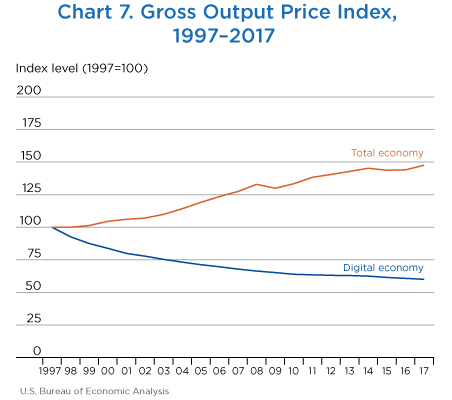 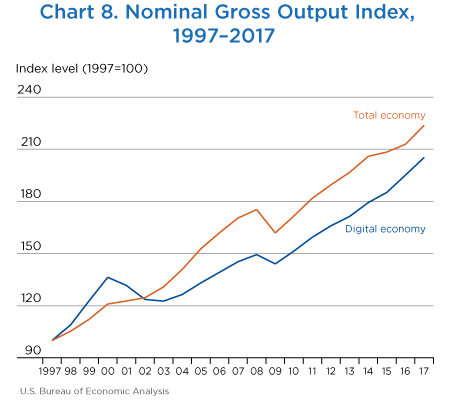 In 2017, the digital economy supported 5.1 million jobs, which accounted for 3.3 percent of total U.S. employment (152.1 million jobs), comparable to the transportation and warehousing industry (chart 9). Employees working in the digital economy earned $132,223 in average annual compensation compared to $68,506 average annual compensation per worker for the total U.S. economy. 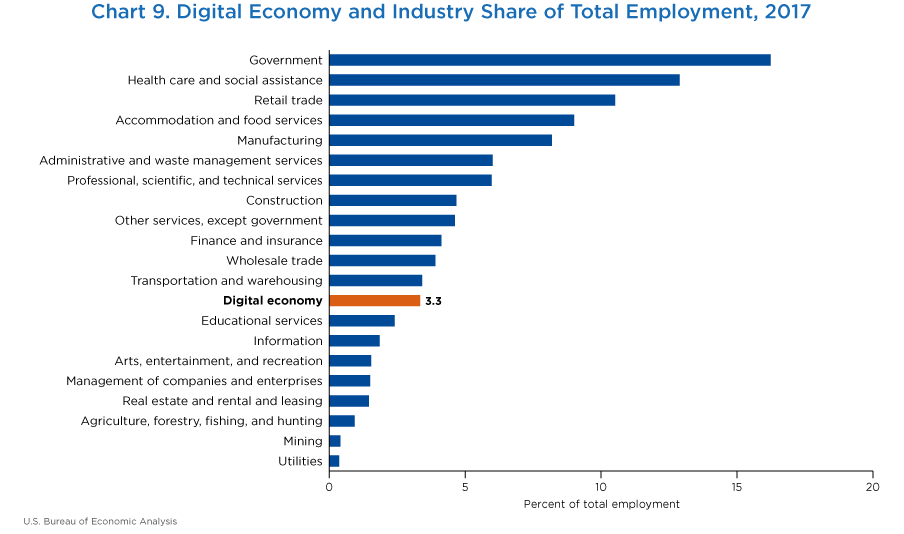 BEA is working to expand the coverage of the digital economy estimates to include additional e-commerce activity and selected partially digital commodities. The feasibility of expanding the coverage is conditional on data availability. BEA is also exploring data and methodologies to include activities of digital intermediaries, such as ride-hailing activity. At this time, cloud computing estimates are fully included in BEA digital economy estimates but are not a separate line item, like hardware or software. Some of the NAICS-based services categories include output related to cloud computing services as well as unrelated output. BEA needs additional data to estimate the relevant portions to separately value clould computing in the digital economy estimates.