On March 28, 2022, President Biden submitted his proposed Budget of the United States Government, Fiscal Year 2023 to Congress. This article presents estimates of federal government receipts and expenditures for fiscal years 2022 and 2023 that are consistent with the projected receipts and outlays defined in that budget but measured on a National Income and Product Account (NIPA) basis. These estimates are presented to assist readers in interpreting what the effects of budgeted receipts and outlays would be on aggregate economic activity. They are also used by the U.S. Bureau of Economic Analysis (BEA) to inform estimates of federal government transactions including the federal government components of gross domestic product (GDP).1 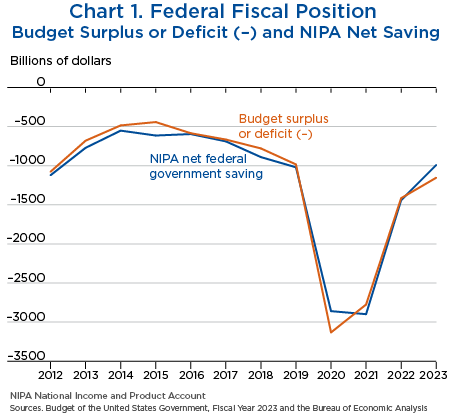 Sources. Budget of the United States, Fiscal Year 2023 and the Bureau of Economic Analysis.

The Budget projects increases in federal receipts of $389.5 billion in 2022 and $201.6 billion in 2023 (table 5). These increases reflect underlying budget assumptions about economic activity and growth in real GDP over these years.3 Projected economic growth would result in increases in both personal incomes and corporate profits that would increase individual and corporate tax revenues. Increases in individual and corporate taxes also include the effects of budget proposals to increase tax rates on corporations and wealthy individuals. The acceleration in social insurance tax receipts in 2022 includes the effects of deferment, by some businesses, of the employer's share of Social Security and self-employment taxes from 2020 and 2021 until 2022 and 2023.4 The projected increase in federal receipts in 2023 is moderated by projected downturns in customs duties collections and in deposits of earnings by the Federal Reserve System.

The Budget projects decreases in federal outlays of $970.9 billion in 2022 and $59.5 billion in 2023 (table 6). The decrease in 2022 reflects the pattern of spending in response to the COVID–19 pandemic, particularly in the functions for income security, commerce, and general government. The income security function includes outlays for unemployment benefits, housing assistance, Supplemental Nutrition Assistance Program (SNAP) benefits, and the direct economic impact payments that were distributed to people in response to the COVID–19 pandemic. The commerce function includes assistance provided to businesses in response to the pandemic including through forgivable Paycheck Protection Program loans. The general government function includes assistance provided to state and local governments through the Coronavirus Relief Fund.5 The smaller decrease in 2023 reflects the pattern of spending in the same three functions as well as a projected upturn in interest paid on Treasury debt securities within the net interest function and a downturn in auction receipts, which are recorded as negative outlays in the undistributed offsetting receipts function.

The budget projections discussed above include receipts and outlays that would result from the continuation of current policies plus the effects of policies that are proposed in the Budget but have not yet been enacted. The Budget also includes projected estimates of receipts and outlays that are consistent with the expected deficit outlook in the absence of any policy changes. These current services baseline estimates serve as a benchmark against which to measure the effects of proposed policies.

This year's budget also includes a reserve fund to account for future legislation that is currently being negotiated with Congress. Because these negotiations are ongoing, the Budget does not describe the specific tax or spending policies that would be supported by this fund. However, the president's priorities for this legislation are discussed in the Budget of the U.S. Government.

NIPA estimates of federal government receipts and expenditures that are consistent with the projected receipts and outlays defined in the Budget for 2022 and 2023 are displayed in table 7. This table also includes estimates for calendar year 2022 that are derived by extrapolating forward from the NIPA estimates that were published for the fourth quarter of 2021, as released on March 30, 2022. More accurate estimates for calendar year 2022 based on more contemporaneous data will be published each month in NIPA table 3.2 and in related underlying tables.

NIPA estimates of federal government current expenditures that are derived from projections in the Budget decrease $949.4 billion in 2022 and $159.0 billion in 2023 (chart 3). The large decrease in 2022 includes decreases in social benefits, subsidies, and grants-in-aid to state and local governments. The decrease in social benefits reflects decreases in unemployment benefits, SNAP benefits, and refundable tax credits. The decrease in subsidies reflects a drop in COVID–19 assistance to businesses including the subsidy portion of Paycheck Protection Program loans. The downturn in grants-in-aid reflects downturns in economic affairs and income security grants programs, which include assistance provided to state and local governments through the Coronavirus Relief Fund.7 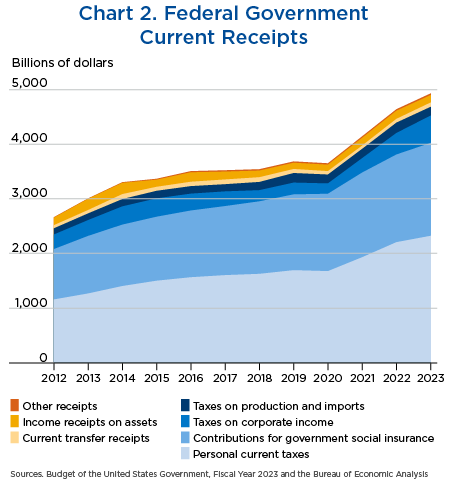 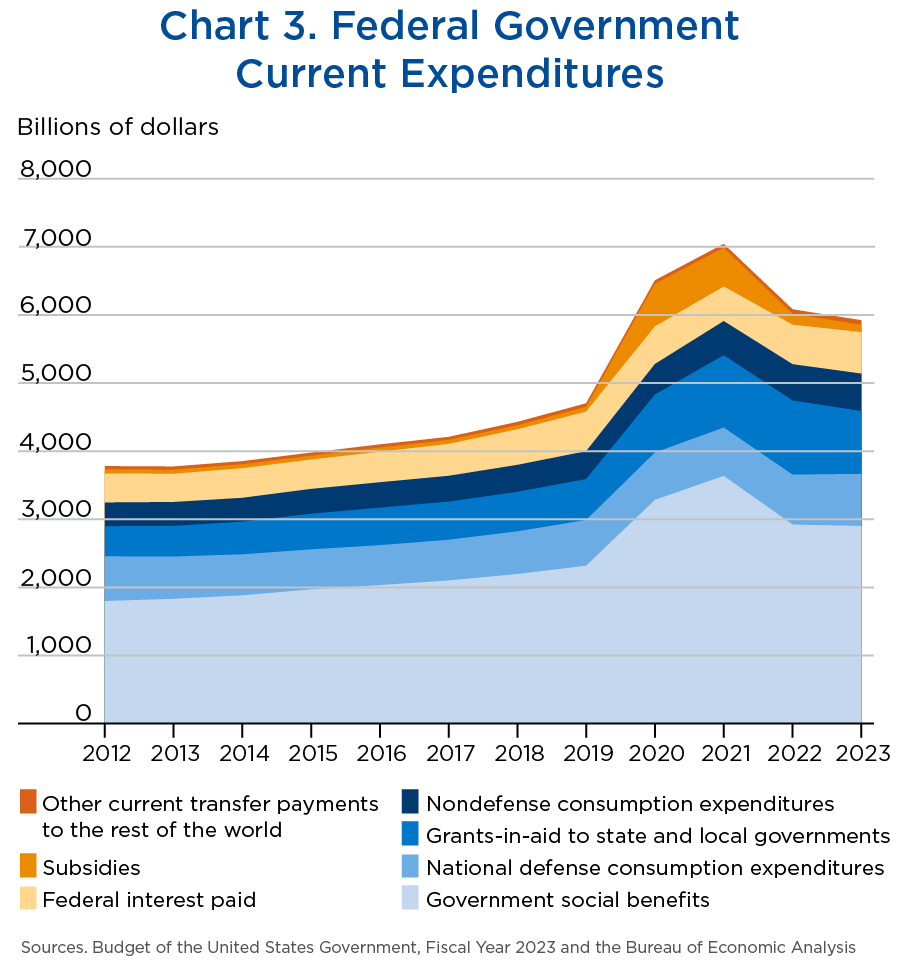 When quarterly NIPA estimates are published, estimates of defense consumption expenditures and gross investment will be reconciled with outlays reported in the Monthly Treasury Statement using financial, delivery, and other information from the U.S. Department of Defense. For nondefense expenditures, extrapolations of budget data will be used in the estimation of some categories of spending including expenditures for durable goods, nondurable goods, services, and equipment for which no quarterly source data are available. Other categories of spending will incorporate quarterly source data, such as data for construction from the U.S. Census Bureau and data for compensation from the U.S. Office of Personnel Management and the U.S. Bureau of Labor Statistics.

The arrangement of federal transactions in NIPA statistics also differs from that in budget estimates. One difference is in the treatment of capital transactions. Unlike budget estimates, the NIPAs distinguish between current transactions for production, income, and consumption and capital transactions, which include expenditures to acquire, improve, or dispose of nonfinancial assets, such as property, equipment, or certain intangible assets.2 The following types of transactions are not included in NIPA federal government current receipts and current expenditures but are shown in the NIPA domestic capital account:

For most years, the differences between NIPA current receipts and budget receipts primarily reflect capital transfers received, supplementary medical insurance premiums, and personal and business current transfer receipts that are classified as receipts in the NIPAs but are netted against outlays in the Budget.