New Foreign Direct Investment in the United States in 2018 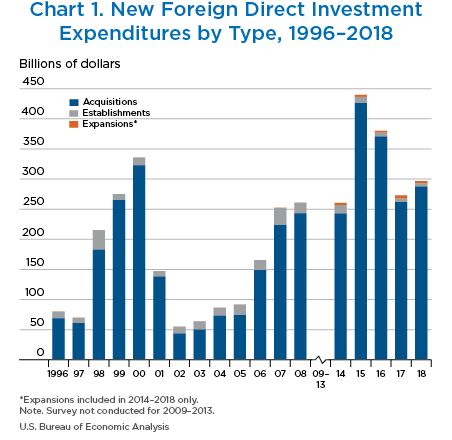 Expenditures and Activities of New Enterprises

Expenditures by industry, by country, and by state

Expenditures by country. By country of ultimate beneficial owner (UBO), a small number of countries continued to account for most of the investment. The top investing countries were Germany and Ireland, but their values were suppressed due to confidentiality requirements. There were also substantial expenditures from Canada ($32.5 billion), Switzerland ($22.4 billion), and France ($19.9 billion) (table 2). By region, nearly three-fourths of the new investment in 2018 was from Europe.

Expenditures by state. The largest expenditures were for U.S. businesses in Missouri, but its value was suppressed due to confidentiality requirements.2 In 2018, there were also substantial expenditures in New York ($63.0 billion), Texas ($31.1 billion), and California ($27.3 billion) (table 3).

For greenfield investment initiated in 2018, first-year expenditures were $9.1 billion, and planned spending in other years until completion were projected to be $21.7 billion, resulting in total current and planned greenfield expenditures of $30.8 billion (chart 2 and table B). 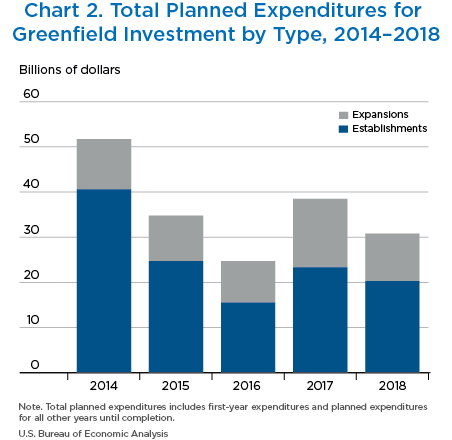 Despite the increase in expenditures in 2018, newly acquired, established, or expanded foreign-owned businesses in the United States employed fewer workers than in 2017, due to the presence of several substantial investments in labor-intensive industries in 2017, such as accommodation and food services and administration, support, and waste management. First-year (current) employment by new foreign direct investments was 430,600 workers, down from 521,300 in 2017.3 Current employment of acquired enterprises (426,400) accounted for almost all of the employment in 2018.

Statistics on other activities

Net income of newly acquired or established affiliates was $7.1 billion in 2018, up from $6.1 billion in 2017. In 2018, net income of newly acquired or established U.S. affiliates was 5.1 percent of their sales; in 2017, their net income was 4.6 percent of sales. The equivalent percentage for all U.S. affiliates of foreign multinational enterprises in the United States in 2016 (the most recent year for which these data are available) was 2.4 percent.4 This difference partly reflects differences in the industry mix of new affiliates compared with all affiliates.

Updates on projected versus actual expenditures

Actual expenditures can differ substantially from projected expenditures for multiyear greenfield investments for reasons such as changes in current or expected business conditions or expenses. To more comprehensively measure new foreign direct investment in the United States, BEA has conducted follow-up surveys of investments initiated in 2014, 2015, and 2016.

Detailed statistics on new foreign direct investment in the United States—including statistics for 1980–2008, 2014–2016, revised statistics for 2017, and preliminary 2018 statistics—are available on BEA’s website. Statistics are not available for 2009–2013, because the survey was not conducted during those years.

The statistics of new investment by foreign direct investors are based on data reported in the Survey of New Foreign Direct Investment in the United States (BE–13) conducted by BEA. The survey covers U.S. business enterprises that were acquired, established, or expanded by foreign direct investors. Information on the filing requirements for the survey may be found on BEA’s website.

Data on new foreign direct investment in the United States for 2017 that were released in July 2018 have been updated to incorporate newly available and revised BE–13 survey data.

BEA has adopted a 1-year update policy for these statistics. Each year, when BEA releases the preliminary statistics for the most recent year, BEA will also release updated statistics for the previous year that incorporate newly available and revised survey data.

All article body text footnotes, which are displayed throughout the article in popover bubbles, appear here as end notes.

(*)
A nonzero value that rounds to zero.
D
Suppressed to avoid disclosure of data on individual companies.